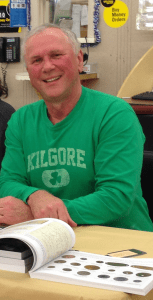 Frank Kilgore is an attorney in St. Paul, Virginia, and the son and grandson of coal miners. The Kilgore family settled in southwestern Washington County, which later became Scott County, Virginia, during the mid-1700s. Several became Indian fighters and also fought the British Tories at the Battle of Kings Mountain, a turning point in the Revolutionary War. Frank is active in natural resource conservation, local history preservation, higher education, healthcare, and youth development programs in Southwest Virginia.

Frank is the author of The Clinch River: A World-class Treasure, a science textbook highlighting the natural resources and conservation activities within the watershed. Soon after he researched and edited The Virginia Headwaters of the Big Sandy River: A Story of Revitalization and Nature’s Resilience, a textbook focusing on a neighboring watershed. Both books were donated to high school students as part of a place-based studies project within the watersheds.

When he has time and takes a notion, he publishes a new edition of Mountain Peeks Magazine.