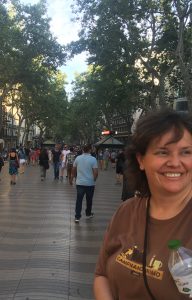 Kari Kilgore finished her first published novel Until Death in Room 217 at the Stanley Hotel in Estes Park, Colorado, where a rather famous creepy tale about a hotel sparked into life. That’s just one example of how real world inspiration drives her fiction.

Kari’s novels, novellas, and short stories are available here at www.spiralpublishing.net, which also publishes books by Jason A Adams and Frank Kilgore.

Kari’s first published novel Until Death was on the Bram Stoker Award’s Preliminary Ballot for Superior Achievement in a First Novel in 2016, and it was a finalist for the International Vampire Film and Arts Festival’s Golden Stake Award in 2018.

Her short story In the Company of Women was named Silver Honorable Mention in the 2018 Fourth Quarter Writers of the Future contest.

Her professional short story sales include several to Fiction River anthology magazine and three stories in a holiday-themed anthology project with Kristine Kathryn Rusch due out over the holidays in 2020, as well as one for Valentine’s Day, due in February of 2021. Her first professional publication was Fiction River: Superstitious in 2019, and she has three more Fiction River stories on the way.

Kari writes first and figures out the story’s genre later. That’s resulted in fantasy, science fiction, romance, contemporary fiction, and everything in between. She’s happiest when she surprises herself. She lives at the end of a long dirt road in the middle of the woods with her husband Jason A. Adams, various house critters, and wildlife they’re better off not knowing more about.

Want more fiction from Kari, including stories, discounts, and box sets not available anywhere else? Want to learn more about locations, research, and other cool things that inspired these stories and beyond? All that, adorable pet photos, and a free short story when you join, too?

Visit The Confidential Adventure Club page to learn more, or join below.

Hope to see you there!